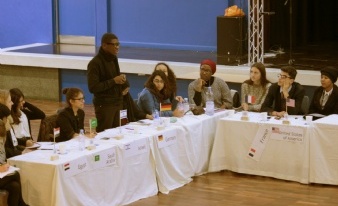 The third annual Model United Nations simulation was held this week comprising of 13 nations taking part in the debate “To reach a comprehensive, long-term and proper solution to the Iranian nuclear issue”. Leading up to the debate, Year 12 and 13 students had been preparing their case in small research teams, from which a delegate was chosen to represent their allotted nation. Each delegate was given the opportunity to put forward their case in a formal speech, then the resolution was debated, final remarks were given and a vote was passed.

The standard of research, public speaking and debating this year were better than ever ,with some genuine rhetorical talent on show. Saffa Abdi in Year 13 was awarded the prize for her superb position paper as the Iranian delegation; whilst Year 12 student Kimberley Carstens won the public speaking prize for her speech representing the Saudi Arabian position; but the star of the show was undoubtedly Keiran Williams in Year 12 who won the prize for best debating. At one point the whole UN assembly stopped the debate to applaud his robust defence of Germany’s position. Keiran clearly has a bright future in diplomacy if he so chooses. Finally, the nations voted and the resolution was passed by 10 votes to 3.