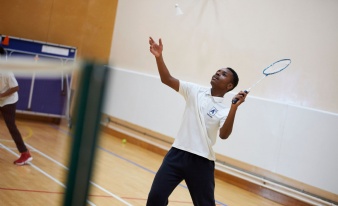 Please find below a report of the sports and activities that have occurred in the PE department during the month of February.

Outside of the Academy

Huge congratulations to Harvey Mansiamina from 9t2 who competed in the London Schools Athletics Cross Country Championships on Wednesday 6th February. Harvey managed to finish third overall with a time of 12 minutes and 10 seconds, just 15 seconds off the lead time. This is an incredible achievement and Harvey will now go on to represent London in the English Schools competition and compete at regional level.

Well done to Elliott Hampton from 10t6 who competed in the 800m Freestyle County Swimming Championships and achieved a silver medal. His time was 9 minutes and 31 seconds and this puts Elliott into the top 50 swimmers for his age group in the country. Well done, Elliott and good luck in trying to improve upon that time further.

On Friday 15th February, Mohammed travelled to Slovenia for the Taekwondo Slovenian Open Championships. This is only Mohammed’s second experience at competing in the senior category and the PE department are well aware of all the preparations Mohammed had to undergo in preparation for this Championship – not just the skill training but the need to meet the weight requirement. It gives me great pleasure to state that Mohammed finished with a bronze medal, which includes the accolade of defeating the highest rank performer in round 2! Mohammed is currently on the Team GB programme and we watch his development with great anticipation. We wish Mohammed the very best of luck in his forthcoming competition at the Netherlands Open.

On Sunday 3rd February, a number of Ashcroft students took time to enter trials for the London Mini-Marathon. It was a 5km run that covered the final distance of the actual London Marathon race – something that not many will have the opportunity to experience in their lifetime. The race was split into categories of under 13’s, under 15’s and under 17’s. In the U13 girls’ category, the following students achieved extremely good times and credible finishing positions: Lottie Harvey 7t1 - 13th with a time of 22:04.93, Amelie Archer 8t4 – 16th with time of 22:27.11 and Katie Hughes 7t2 – 17th with a time of 22:27.55. In the U13 boys’ category was Trishaun Charles 8t6 – 13th – with a time of 19:41.03. And in the U15 boys’ category, Harvey Mansiamina from 9t2 produced an incredible time of 16:47.01 and a final position of 4th. Congratulations to all the students named above and we wish them luck in their future athletic performances.

The years 7 and 8 boys’ cricket team had the experience of competing at an Indoor Cricket tournament, held at the Oval, on Friday 8th February. A good display of skill from Ashcroft students resulted in one win and two losses from our three games. The improvement to take into the summer competition is to improve upon the tactical strategy witnessed by students from other schools who have gained more experience. Well done to Sikander Ahmad 7t2, Shiv Bhari 8t1, Isaac Gamble 8t1, Shahab Majoka 8t4, Nosheirwan Jajja 8t6 and Jazib Bajwa 8t7.

The years 9 and 10 boys’ cricket team had the experience of competing at the Indoor Cricket tournament, held at the Oval, on Friday 1st February. A good display of skill from Ashcroft students resulted in one win and two losses from our three games. The improvement to take into the summer competition is the tactical strategy adopted by students from other schools who have more experience. Well done in particular to Mohammed Ahmed from 10t5 who was awarded the shot of the day and presented with a pair of cricket gloves from Mark Stoneman – England and Surrey professional cricket player. Congratulations to Sarib Jajja 9t6, Issam Azizullah 9t6, Mashhood Khokar 9t7, Faiz Khawaja 9t7, Masroor Deol 10t3, Harrison Lee 10t5, Labeed Qadeer 10t5, Mohammed Ahmed 10t5 and Ansar Khan 10t7.

Hard luck to the Year 10 girls’ Netball team who were defeated by 23 goals to 10 on Wednesday 27th February against a very experienced Graveney team. Even though there is quite a wide deficit in terms of scoring, the year 10 girls’ competed with good intensity and never gave up. The next fixture will be versus Chestnut Grove in March and a more positive result is expected.

This proved to be a valuable experience for this set of students who managed one draw and two losses from their three league games of the Wandsworth borough 6-a-side tournament. It was an insight to the high standards in the borough of girls’ football in terms of skills and tactics. The two defeats were against Southfields and Graveney, but Ashcroft managed an impressive 2 – 2 draw versus Ark Putney Academy – goals coming from Lottie Dyer 7t7 and Sarika Ponde 7t6 – this result even more significant as Ark Putney Academy went on to win the tournament. Other students who participated were Mahiim Sheikh 7t1 , Lottie Harvey 7t1, Katie Hughes 7t2, Avni Bakre 7t3, Amilah Gebeyehu 7t4 and Agatha Glutch 7t5. I look forward to seeing you at football club next week!

Unfortunately, the year 7 team suffered their second successive loss with a 5 – 2 defeat against City Heights Academy, goals scored by Sameed Tahir 7t5 and Mouadh Nour 7t3. It was a tough test from a school that is competing in the Wandsworth league but is located in another borough. It is a good insight to the standards outside of Wandsworth to which many of these students will have to compete against at the next level. The next fixture will see Chestnut Grove visit Openview in March. The year 7 team will probably not qualify for the final and finish outside the top two schools, but we take confidence from an impressive first year, and not to forget the victory in the 6-a-side format.

February has proved to be a positive month for the Year 8 boys’ football team with one win and a draw from two games. The first game was a 4 – 3 victory against Bolingbroke in the Wandsworth Football League with goals coming from Tenashay Martins-Walker 8t3, Milo Koba 8t1 (2) and Ishmael Bygrave 8t3.  The next game was an enthralling 2 – 2 draw with Harris Academy Battersea, with goals scored by Milo Koba 8t1 and Ismael Bygrave 8t3 – I hope this result proves that this year group can compete with the best schools in the borough. The next fixture will be on Tuesday 5th March in a friendly versus St Cecilia, and we look forward the borough 6-a-side tournament on Friday 22nd March.

Unfortunately, the year 9 team suffered their first defeat of the season with a 1 – 0 loss to City Heights Academy. It was a tough test from a school that is  competing in the Wandsworth league but is located in another borough. It is a good insight to the standards outside of Wandsworth to which many of these students will have to compete against at the next level. However, we hope that previous results will allow Ashcroft to finish in the top two in the league and qualify for the final in May. The next fixture will be on Tuesday 5th March in a friendly versus St Cecilia, and we look forward the borough 6-a-side tournament on Tuesday 12th March.

Congratulations to the year 10 boys’ football team who secured their first point of the season with a 1 – 1 draw versus Bolingbroke – the goal being scored by Labeeb Ahmad 10t4. It was a game that Ashcroft should have actually won but we conceded in the final minute! But hopefully this will give the team further confidence going into the remaining fixtures of the season. The next fixture will be on Tuesday 19th March versus Southfields in the Wandsworth league, and we look forward the borough 6-a-side tournament on Wednesday 27th March.