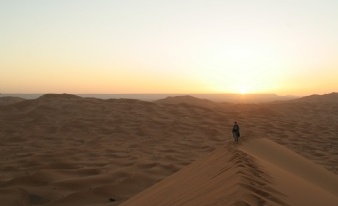 36 students and 4 Staff enjoy the sights, the culture and the November warmth of Morocco

At 5am on the 28th October, 37 students and 4 teachers arrived at the Academy with luggage in tow, ready to leave for the airport. Despite the early hour, everyone was almost disconcertingly awake. Indeed, the main thought on everyone’s minds was excitement in anticipation of the imminent flight to Morocco. After the long flight there, stepping off the plane onto the tarmac, the sun already began to beat down on us. After the drive to the hotel, enjoying the view of the fantastically exotic architecture through the windows, the students were almost immediately plunged into the culture. We explored Medina, the old town of Marrakech, and ventured into the souks. Although the vast labyrinth of market stalls was perhaps for some a little daunting, it provided a much-needed opportunity to refine our haggling skills, and was an excellent start to the trip.

The next morning after breakfast we travelled into the centre of Marrakech, first visiting the beautiful architecture of the Bahia Palace, where fine marble-paved courtyards contrasted wonderfully against the lush gardens. We then headed back to the coach to visit the El Badi Palace, in one of the oldest neighbourhoods in Marrakech. The crumbling bricks of a grandeur discarded by time was a sight to behold in itself, and the palace afforded truly spectacular views over both the city of Marrakech and the courtyard, which resembled some kind of Garden of Eden-like paradise. After lunch in the city and a drive through the twists and turns of the High Atlas Mountains, we visited a traditional Berber pharmacy, where we were shown by a local farmer the creams and oils made from argan nuts, almonds, amber and rose.

The following day we boarded the coach and headed off into the direction of the Sahara, travelling along the Valley of a Thousand Kasbahs. We stopped to visit the Todra Gorge, a narrow trench through the High Atlas, and watched the water flow through the ravine. In the evening we arrived at Erfoud, and exchanged the coach for 4x4 vehicles which we then rode into the desert.  By this time it was nightfall, and as we reached the sand dunes, we mounted camels and rode them towards the camp where we would be staying, in a truly otherworldly journey under the stars. When we arrived at the camp we were greeted with a traditional Berber dinner, followed by music around a campfire. Some of the students tried their hand at the drums, but the job was soon taken over by the experts, who performed songs in Berber for us before we went to sleep in Berber tents.

This was followed by an early start the next day, where we woke before sunrise and climbed one of the 200 metre Great Dunes of Erg Chebbi located behind the camp. It was a fairly arduous climb, but some members of the group managed to make it to the very top, where they were enjoyed a spectacular view as they watched the sunrise over the vast, golden sands of the Sahara. After breakfast we mounted the camels again and rode back through the desert, this time during under the scorching Saharan sun, where we could now witness the sweeping ridges and curves of the dunes as we travelled past them. We left the desert by boarding the 4x4 vehicles once again and then began to travel back to the hotel in Ouarzazate via coach, stopping for lunch and then driving through the Tizi-n-Tinifitt Pass and the Dry Mountain. It was a long day and everyone arrived back at the hotel very much exhausted, and climbed into bed for an early night after dinner and a much-needed shower.

The following morning we explored the former Foreign Legion town of Ouarzazate, including the Kasbah of Taourit. The highlight of the morning was the visit to the Atlas film studios, where scenes from Gladiator, The Kingdom of Heaven, and The Hills Have Eyes were shot. The Moroccan horizon was an uncanny contrast against the plaster Egyptian temples and Ancient Roman chariots. The sets all seemed rather larger than life, and the scattering of film props on the sandy ground made it almost appear like a playground for giants. Later on in the evening, for dinner, we returned to Marrakech and experienced an authentic Moroccan Fantasia dinner under tents at the restaurant Chez Ali. Here, troupes of musicians, singers and dancers wandered around the tables to entertain us. It was quite an experience for the senses, to say the least. After dinner was the finale, a horse and rifle show based on an ancient war ceremony, which formed an exhilarating end to the evening.

On the final day of the trip we returned to the souks once more. This time, after doing our own shopping for an hour, we were split into groups and took part in a challenge to test our haggling skills. Each group was given 300 Dirham to buy as many items on a list as possible within an hour, including a chess set for the school’s chess club, a tasteful ornament for the Academy, and a gift for our tour guide. Tensions ran high in some groups, and at one notable point, one group visited a stall and paid 30 Dirham for a shawl, only for the group immediately following them to pay 50 Dirham! The results were announced at the airport before boarding the flight home to London, and it was a close call, but it was the Principal who had led his group to a triumphant victory. Upon finally arriving back at Gatwick after a delayed flight, the cold London air was quite a shock following the sun of Morocco. However, everyone was sufficiently exhausted that the first thing on their minds was relief at the thought of being able to finally sleep in their own beds.